A mother with cancer has shared shocking images of how her chemotherapy cream leaves her looking like an ‘acid attack victim’.

Honore Stark from Toronto in Canada, initially dismissed an ‘unusual spot’ on her forehead which she discovered in 2008 as eczema, until she began to gnaw at its flesh.

The “huge” spot turned out to be a form of skin cancer.

Countless lesions have appeared all over the 53-year-old’s body since his diagnosis.

Despite having had around 30 surgeries to remove them, Ms Stark still has to use chemotherapy cream to prevent her from getting further cancerous lesions.

But the mother-of-four describes the cancer cream as akin to “pouring acid” on her skin, as it leaves it covered in painful red scabs.

Discussing the side effects of the cream, which she has to wear for six hours a day, she said: ‘It looks like I had an acid attack.

Ms Stark claimed the scabs, which can cover many parts of her face and neck, lead some people to think she has been attacked or has an infectious disease.

“I saw people walk away from me. It hurt me and I felt rejected,” she said.

“People were pointing at me and just didn’t understand if I had a contagious disease, or if someone had hurt me badly or if I had been in a car accident.”

Having never advised on sunscreen before her diagnosis of skin cancer, Ms Stark is now trying to raise awareness of the disease and how to prevent it. 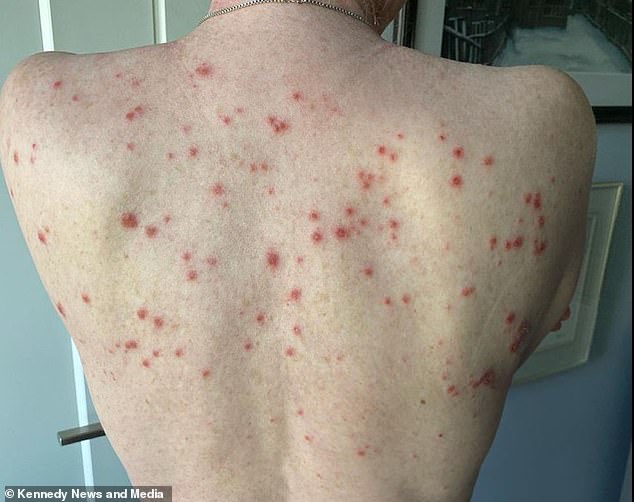 Ms Stark, who was diagnosed with skin cancer in 2009, has had more than 30 operations to remove the lesions from her body, but has to apply the cream daily to control the cancerous tissue. 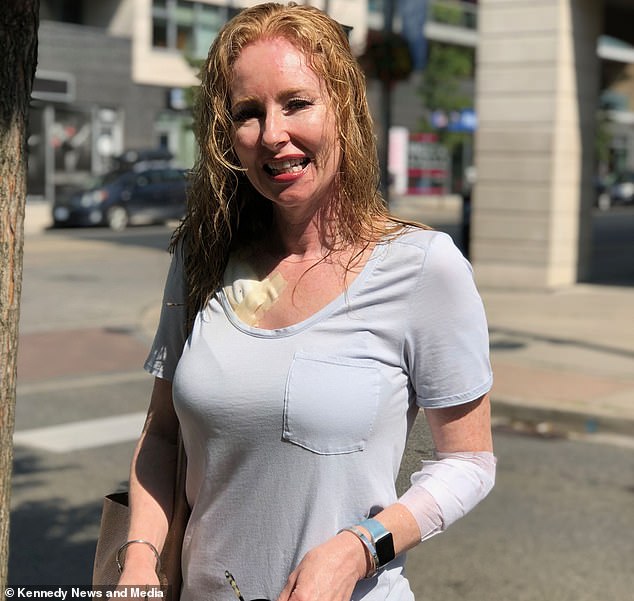 Ms Stark is now seeking to raise awareness of skin cancer and urging people to use sunscreen and wear a hat to avoid a diagnosis similar to hers.

HOW TO STAY SAFE IN THE SUN

This can happen overseas or in the UK.

To stay out of the sun, experts recommend people:

Ms Stark’s skin cancer journey began in 2008 when she spotted a ‘dime-sized indentation’ with a scaly texture at the top of her forehead.

“In the first few months I saw it, I thought it was dry skin or eczema,” she said.

However, she said he did not go away and started showing worrying signs.

“It was eating my skin and tissue and getting extremely close to my forehead bone and it scared me to see my doctor,” she said.

Ms Stark, who is unemployed, recalled the shock of the initial diagnosis of basal cell carcinoma and the lack of empathy from the first doctor she saw.

“I was quite nervous and didn’t know anything about skin cancer, and when she immediately looked at my forehead and said ‘you have cancer. We need to set a date for surgery to remove it,” she said.

“I was very put off by his lack of empathy and was quite upset. I started crying.’

Changing doctors, Ms Stark has now had more than 30 surgeries to remove various lesions since 2010, with the cancer also appearing on her neck, arm and chest.

“I’ve had many lesions over the years, I couldn’t count the number,” she said.

As part of her ongoing treatment, Ms Stark must wear sunscreen in all weathers and can never be exposed to direct sunlight again.

Ms Stark believes her cancer is the result of never applying sunscreen or taking other measures to try to protect her skin.

“I put sunscreen on my kids, but I didn’t wear any at all,” she said.

“I had sunscreen at home, but it wasn’t something I thought about every morning before going out.

“I didn’t wear a hat or stand under an umbrella, and that’s exactly why I have so much cancer.”

Having not worked since her diagnosis, she now tries to raise awareness about skin cancer and sun safety by making TikTok videos, and has amassed over 240,000 likes and followers in the process. 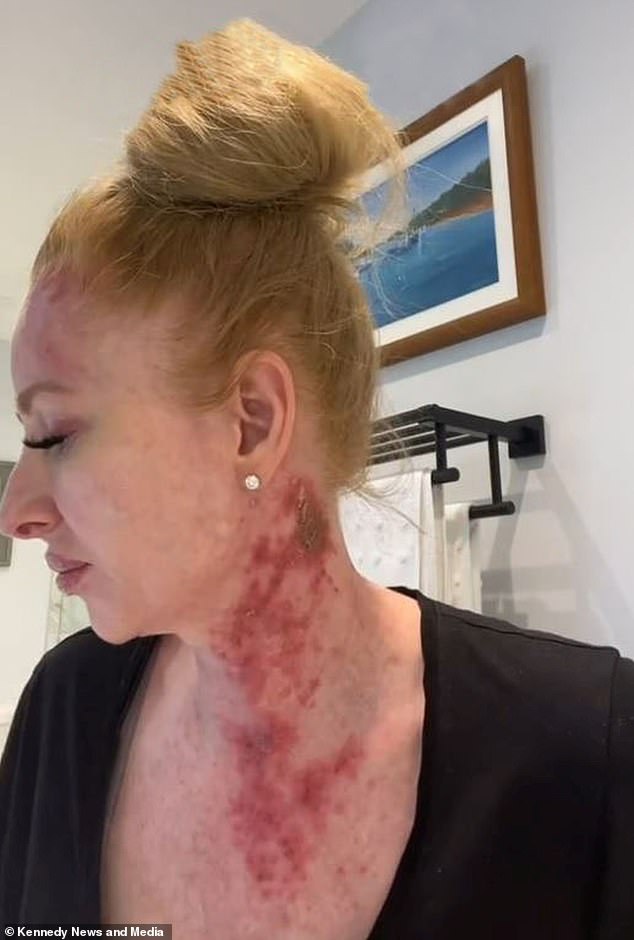 The first sign of skin cancer the mother-of-four found was an ‘unusual spot’ on her forehead which she found in 2008 but initially dismissed as eczema. However, following his diagnoses, similar lesions appeared on his neck, arm and chest. 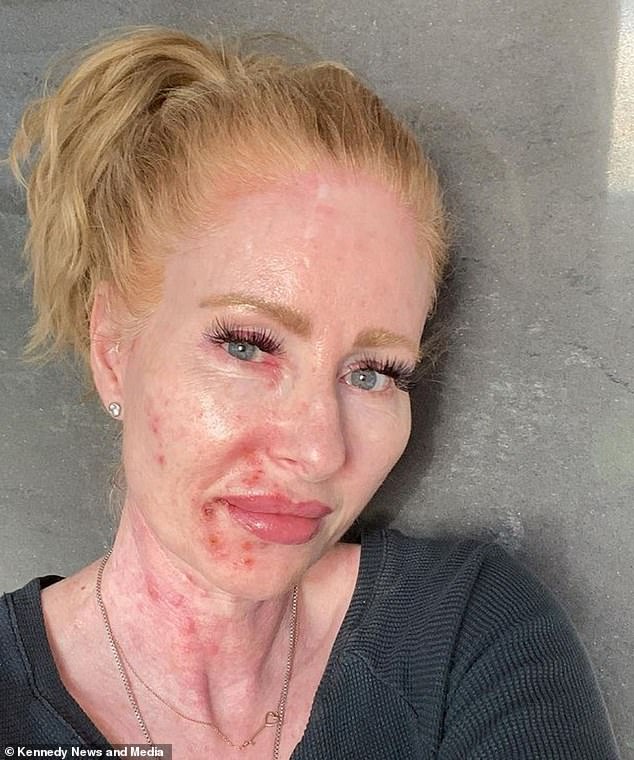 The 53-year-old said she has never worn sunscreen or used a hat when out in the sun and that’s why she now has the skin of a ’70 or 80 year old woman’.

“I want people to understand that small behaviors that they can incorporate into their routine can prevent this from happening,” she said.

“So you’re wearing a hat, I see babies out in the sun with no hats off and I’m like ‘that scares me,’ because of what their future might look like.”

His skin cancer is called basal cell carcinoma and is the most common form of the disease. However, it usually does not spread to other parts of the body.

They mainly appear in areas of skin that are frequently exposed to the sun, such as the nose, forehead and cheeks as well as the back or lower legs.

Skin cancers are roughly divided into two types, non-melanoma and melanoma, with basal cell skin cancer being the first.

Deaths from non-melanoma skin cancers are rare with just 720 deaths in the UK each year, accounting for less than 1% of all cancer deaths.

Skin cancer rates in the UK and US have increased over the past decade.

Chemotherapy cream, like other types of cancer treatment, can cause side effects, although not all patients experience them.

Whether a chemotherapy patient experiences side effects from their treatment may depend on the particular drug(s) they are taking.

Many side effects of chemotherapy can also be treated or prevented, and most stop once treatment is finished.