Johnny Depp returned to the witness box on Wednesday in his defamation trial against ex-wife Amber Heard and offered more explosive testimony about their brief marriage, including that his ex-wife intentionally left feces on his side from their bed.

“It was so out there, it was so bizarre and so grotesque that I could only laugh,” Depp said in the courtroom in Fairfax, Va.

On the second day of his testimony, Depp told the court that as his relationship with Heard deteriorated, he wanted his belongings back from their Los Angeles penthouse. He said he had let his security guards know that he planned to visit the building. But he received a message from them saying it was not the right time. Depp said he wanted to know why, when he was told he had to wait because there was “human feces” on his side of the marital bed. The actor added that he was sent a photo of the feces as proof.

Depp said when confronted, Heard tried to blame what he called the “fecal delivery” on their yorkies, but he said it was clearly human feces.

Depp spent all day on the stand testifying about his relationship with Heard. He said the “Aquaman” actress threw a bottle of vodka at him, cutting off the tip of his middle finger during an argument, then burned his face with a cigarette. Photos of the injured were shown in court.

The couple were staying in Australia while filming “Pirates of the Caribbean 5” in 2015 when the incident happened. Depp said Heard picked up a bottle of vodka and threw it at him. “I looked down and realized my fingertip had been cut and I was looking directly at my bone sticking out,” Depp said. The actor told the court it was the closest he had ever come to a nervous breakdown and in retaliation he started writing on a wall with his own blood.

Depp said he initially lied about how his finger was cut off to everyone but Dr David Kipper, his private doctor. When asked why he lied, Depp told the court he didn’t want to get in trouble with Heard or admit what really happened. Kipper previously testified that he received a text from Depp saying he cut his finger.

Depp said when he and Heard arrived in Australia she was already in a “spin”. The couple had argued over postnuptial agreements and Heard was furious that she was not in Depp’s will. He claimed she accused him of colluding with lawyers to deceive her. Depp said he tried to explain that he wasn’t trying to fuck her, but the conversation turned into chaos and violence. “She was furious and possessed,” Depp said. 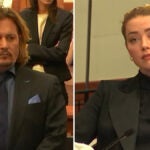 Earlier today, Depp was asked about allegations he punched Heard for making fun of a tattoo he had that read ‘Winona Forever’, since he was dating actress Winona. Ryder. Later, he had it changed to say “Wino Forever”.

Depp insisted that claims he punched Heard were false. “That allegation never made sense to me,” Depp said. “I never hit Ms. Heard.”

The actor was also asked if Heard used drugs or alcohol excessively. He told the court that Heard could “easily drink two bottles of wine a night” and had used ecstasy and mushrooms during their relationship.

Depp is suing Heard for $50 million, claiming she defamed him in a 2018 Washington Post opinion piece, derailing his career. Heard filed a $100 million counterclaim for defamation for calling her a “liar.”

Depp told the court that Disney fired him from the “Pirates of the Caribbean” franchise just days after the article was published.

During cross-examination, Heard’s attorney contradicted Depp’s testimony by saying that Disney decided to move on months before the article was published. Heard’s attorneys also said Depp ruined his own reputation with bad behavior.

The actor’s cross-examination is expected to resume on Thursday. Heard is also expected to speak in the case which could last several weeks.

Anita Bennett contributed to this report.